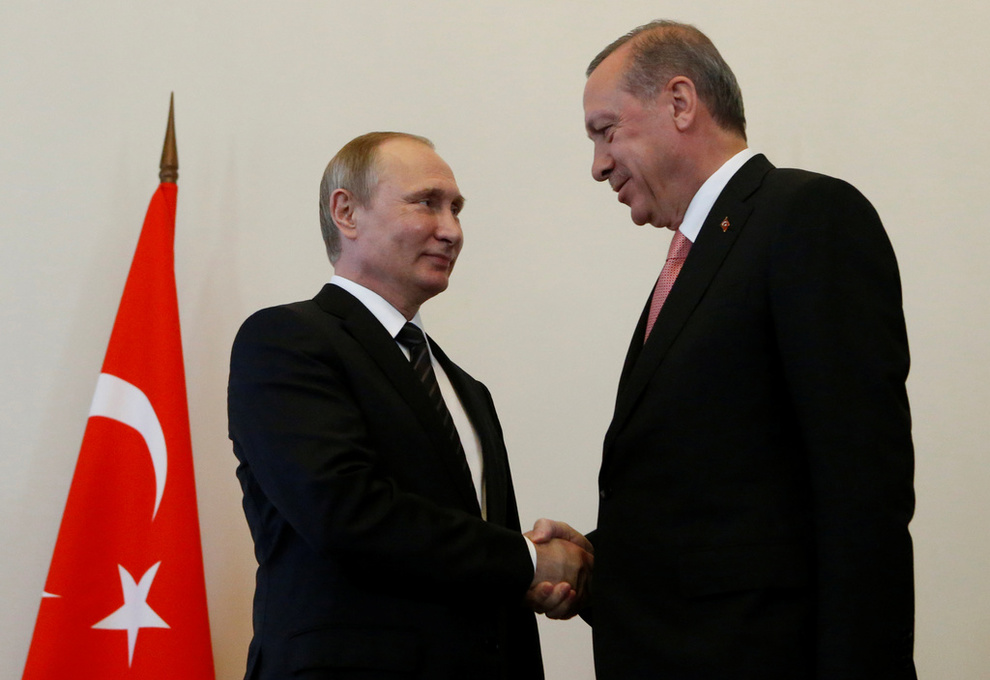 Vladimir Putin and Recep Tayyip Erdogan presented a united front at their first meeting since Turkey shot down a Russian plane last year, promising to rapidly rebuild a damaged economic relationship and find a new common policy for solving the Syrian conflict.

“We have gone through a very difficult moment in the relationship between our two countries, but now we would all like to overcome it in the interests of both our peoples,” said the Russian president during a joint press conference with his Turkish counterpart in St. Petersburg.

As Erdogan wrapped up his one-day visit, the two leaders were effusive in their praise for each other, promising to lift the sanctions imposed after Turkey shot down a Russian plane over Syria in November last year, and to reanimate joint energy projects.

Putin did not attempt to gloss over the disagreements over the Syria crisis, where Turkey has insisted that President Bashar Assad, whom Russia supports, must be deposed. But the two leaders agreed to stage a separate meeting to hammer out a new Syria policy.

“Our views on resolving the Syrian situation have often been at odds,” said Putin. “But I believe that finding a common approach is possible, at least because we both want the crisis to end. We will use this as the basis for finding common solutions.”

In turn, Erdogan praised Putin for personally calling him to express his support following the failed July 15 military coup attempt.

Outside observers noted that the abortive putsch marked a rapid turning point in the relations between the two countries, though signs of a rapprochement had been evident the month before, when Erdogan apologized for the downing of the plane.

During the press conference, Erdogan took the time to once again accuse the “traitorous” supporters of US-based preacher Fethullah Gulen of attempting to overthrow him, but the two leaders spoke predominantly about rebuilding economic ties. Russian officials say that trade turnover between the two states has fallen by two-thirds in the past year.

Erdogan said that even during the diplomatic cooldown behind-the-scenes work continued on the proposed Turkish Stream pipeline, a multi-billion structure that will transit Russian gas to Europe, which will now go at full pace again.

Russia also signed a contract to build Turkey’s first nuclear power plant at Akkuyu in 2010, worth $20 billion. Erdogan said that the plan would now be re-classified as a “strategic project,” paving the way for more concrete completion dates.

Putin promised to liberalize the visa regime, which could enable Turkish construction workers to return to Russia, where they were engaged in several large infrastructure projects, and push for the complete restoration of air traffic with Turkey, which was once Russians’ preferred holiday destination.

“I am sure that we can restore ties to the previous level, and even grow them,” said Erdogan.