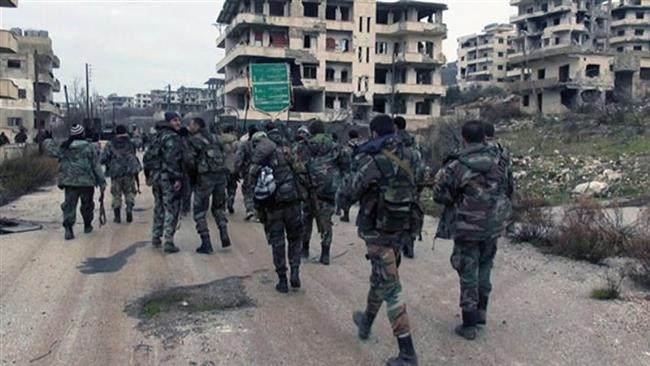 Syrian government forces are advancing further on Aleppo amid an offensive to gain control over parts of the northwestern city that are held by DAESH (IS, formerly ISIS/ISIL).

Syria’s official news agency, SANA, said on Sunday that the government troops backed by volunteer fighters captured Aleppo’s armament academy in the south of the city.

SANA said the army has total control of the academy and it has also “expanded its control in the area of military academies to the south of Aleppo city.”

A Syrian military source confirmed that the government troops had already recaptured the air force academy and terrorists were “besieged in the artillery academy.”

In Aleppo countryside, the source added, the Syrian air force conducted a series of airstrikes against the hideouts of Jaish al-Fatah terrorists.

The so-called Syrian Observatory for Human Rights also confirmed the capture of the armament academy.

Rami Abdel Rahman, the director of the group, said it was now likely that the government forces “easily take Ramussa, a suburb south of Aleppo.”