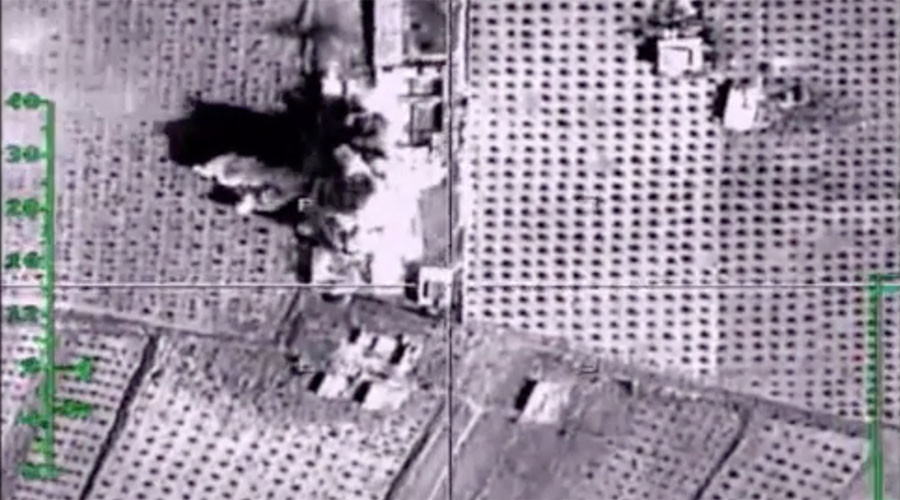 The Russian Air Force has carried out 81 sorties hitting 263 ISIL targets in two days in Syria, the Defense Ministry said in a statement.

Russian jets hit targets that mostly belong to ISIL and other militants in such provinces as Aleppo, Damascus, Deir ez-Zor, Idlib, Latakia, Raqqa, Hama and Homs, Igor Konashenkov, a Defense Ministry spokesman, said Thursday. After their combat missions all the jets returned to the Russian Khmeimim airbase in Latakia, he said.

“In the area of the populated locality of Raqqa, SU-34 bombers hit two fortified block posts belonging to the terrorists, located on the outskirts of the city. Direct aerial bomb hits destroyed the terrorists’ fortified structures housing four units of automobile and armored vehicles,” the spokesman said.

He added that Russian airstrikes also hit a base belonging to one of the ISIL-affiliated gangs in the gorge of the Jebel-Mgar mountains near Damascus, destroying a ammunition warehouse, command post and hidden military equipment.

Su-24 bombers have carried out a strike hitting an IS stronghold near the city of Tadmur in the Homs province, the ministry said in a statement. The strike destroyed a tank in a firing position, a ZSU-23 anti-aircraft system, and a mortar battery, he added.

“The destroyed ISIL stronghold was located more than 30 kilometers from ancient Palmyra,” Konashenkov said. “Let me point out that Russian aircraft have been hitting only terrorist targets far away from architectural monuments.”

“According to data obtained via the joint information center in Baghdad, several days ago a consignment of anti-tank missile systems was delivered to one of the warehouses located in the area of Maarat al-Numan city in Idlib province,” Konashenkov said, adding that the weapons were intended to be used against the advancing forces of the Syrian army.

“After the information had been confirmed via several channels, a pair of SU-25 jets carried out strikes hitting the target and destroying the warehouse together with its contents.”

Su-34 bombers also destroyed an Al-Nusra training base and ammunition warehouses near the Al-Muhasan settlement in Deir ez-Zor province, he added.

During the press conference on Thursday, Konashenkov also made comments in response to recent criticism of Russia’s operation in Syria made by Assistant Secretary Victoria Nuland, who testified before the House Foreign Relations Committee on Wednesday.She claimed that the strikes have failed to target terrorists, and are instead targeting “areas where the Assad regime has lost territory to forces led by the moderate opposition,” naming several provinces including Hama, Homs, Aleppo and Idlib.

Konashenkov, in turn, said that the Russian Air Force has been carrying out strikes “targeting not areas, but terrorist infrastructure facilities.”

He added that Moscow has provided the US-led anti-ISIS coalition’s military attaches with detailed information on the location of terrorist facilities in Syria. He stressed that the information that has been provided has not been contested by either the Pentagon or the US State Department.

Russia launched airstrikes targeting ISIS and other terror groups in Syria on September 30, following a formal request from President Bashar Assad. Russian aircraft have made over 1,600 sorties and hit more than 2,000 terrorist facilities since the start of the operation in Syria, Chief of the Main Operations Department at the Russian General Staff Colonel-General Andrey Kartapolov said Tuesday.

Kremlin has repeated on multiple occasions that Russia’s military forces would not take part in any ground operations in Syria.