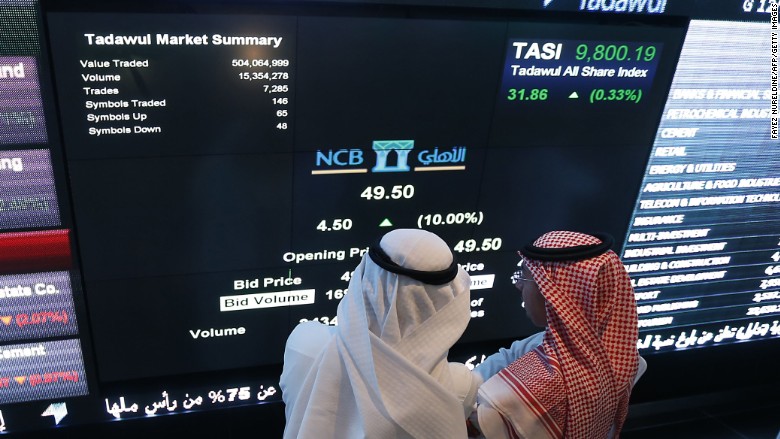 Saudi Arabia is raising $10bn from a consortium of global banks as the kingdom embarks on its first international debt issuance in 25 years to counter dwindling oil revenues and reserves.

The landmark five-year loan, a signal of Riyadh’s newfound dependence on foreign capital, opens the way for Saudi to launch its first international bond issue. It comes as the sustained slump in crude encourages other Gulf governments, such as Abu Dhabi, Qatar and Oman, to tap international bond markets.

The oil-rich kingdom, which last weekend blocked a potential deal among oil producers to freeze output and bolster prices, has burnt through $150bn in financial reserves since late 2014 as its fiscal deficit is set to widen to 19 per cent of gross domestic product this year.

Strong interest in the loan, especially from Asian banks, came despite rating agency downgrades on Saudi creditworthiness since the oil price collapsed. The government raised the amount it wanted to borrow from $6bn-$8bn to $10bn after the deal was oversubscribed.

Saudi Arabia may now raise its first global bond in the wake of the loan deal, bankers said. Institutions that loaned the most would be set to benefit from a mandate to help Riyadh raise the bond.

“The loan is a way for Saudi Arabia to test the waters and set up an international borrowing profile,” said Ewen Cameron Watt, chief investment strategist at BlackRock, the world’s largest asset manager. “This is paving the way for the kingdom to transform from a creditor nation into a debtor nation. It’s a significant moment of change in debt markets.”

The strategy of raising debt overseas aims to slow the drawdown of foreign reserves and reduce pressure on local banks, which have been supporting state related companies and buying Saudi domestic bonds for almost a year.

The lead lenders, each pledging around $1.3bn, include Bank of Tokyo-Mitsubishi, HSBC and JPMorgan, bankers say. Lenders were required to lend at least $500m to participate.

Mr Algaseer declined to comment on the pricing, but other bankers close to the deal said it had priced at around 120 basis points over US dollar Libor.

The loan is Saudi Arabia’s first international debt issuance since 1991, when it raised around $1bn in the aftermath of the Iraqi invasion of Kuwait.

Bankers are now confident that Saudi state-related companies will also seek to raise funds, using the sovereign loan, and later bond, as a benchmark.

Prince Mohammed bin Salman, the king’s powerful son who overseas economic reform, is set to publicize his “vision for Saudi Arabia”, a template for shifting the kingdom into a post-oil era, in Riyadh on April 25.

The “vision” is expected to give more details about the privatization of state oil company Saudi Aramco, the creation of a sovereign wealth fund and other reforms to boost jobs and investment.

JPMorgan, which has decades of experience banking for Saudi Aramco, has been working with the state oil company since late last year on a plan for an initial public offering, people aware of the matter said.

Saudi Aramco is still evaluating how to organize any flotation, which could either list a portion of the holding company, or a collection of downstream assets, on the Saudi stock exchange. But Prince Mohammed has said he intends to float less than 5 per cent of the holding company by 2018.

At the same time, it is ratcheting up spending. It has intervened in a war and airstrikes against neighboring Yemen. Its military budget grew by 17% last year to roughly 10% of GDP.

Abu Dhabi has mandated Bank of America Merrill Lynch, JPMorgan and Citigroup to hold investor meetings this week ahead of the UAE capital’s third international bond.

Qatar, which last year raised a loan of more than $5bn, has sent out a proposal request to lenders to manage an international bond issue, bankers said, and Lebanon has announced a sale of two bonds worth $1bn.