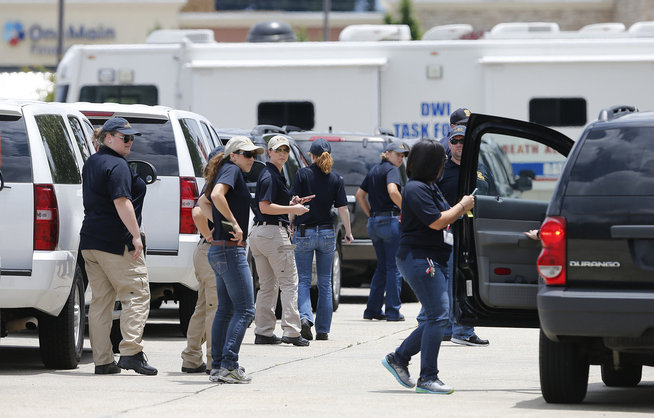 Large police forces hunted for several hours after multiple suspects, but now they believe it only stood one man behind - he was shot and killed. PHOTO: CHRIS GRANGER, AP
Share
Tweet
Share
Share
Email
Comments

Three police officers were fatally shot in Baton Rouge and three others were wounded, according to officials, in what one witness described as a fusillade of dozens of shots shattering the calm of a Sunday morning.

President Obama condemned the attack, which came just 10 days after a gunman killed five police officers in Dallas — and 12 days after police in Baton Rouge fatally shot 37-year-old Alton Sterling while he was pinned to the ground. Police have said the officers, who were white, thought Sterling, who was black, was reaching for a gun in the July 5 shooting. Sterling’s funeral was Friday.

Speaking from the White House, Obama said there was no justification for Sunday’s “cowardly and reprehensible” violence against law enforcement. “Regardless of motive, the death of these three brave officers underscores the danger that police across the country confront every single day,” Obama said.

The gunman, who was African-American, was killed at the scene, police said. But no motivation for the shootings was immediately revealed. A law enforcement official identified the gunman as Gavin E. Long, 29. The official, who is not authorized to comment publicly, said Long is from the Kansas City area and did not appear to have family links to Baton Rouge.

Authorities recovered a rifle and a handgun that Long is believed to have used in the attack. Investigators were looking at Long’s possible links to black separatist groups.

The official said authorities believe that Long acted alone, despite initial reports from local law enforcement that as many as two others were being sought. The Pentagon late Sunday said Long was a decorated Marine who served in Iraq from June 2008 to January 2009 as a data network specialist. He was discharged in 2010.

It was immediately unclear what precipitated the attack, though the official said investigators were reviewing 911 calls to determine whether the officers were lured to the location of the shooting.

Long turned 29 on Sunday, according to public records. Missouri court records show Long filed for divorce from his wife on Valentine’s Day, 2011 in a Kansas City court and that the divorce was finalized on May 24, 2011. The couple apparently had no children.

Louisiana Gov. John Bel Edwards earlier suggested the attack may have involved more than one assailant, but Col. Michael Edmonson, superintendent of state police, told reporters, “We do believe that the person that shot and killed our officers — that he is the person who was shot and killed at the scene.”

“We will continue to do our job in light of what’s happening,” Baton Rouge Police Chief Carl Dabadie said at the news conference. “This is not going to tarnish this city or this department. We’re going to move forward.”

Two “persons of interest” have been detained near Baton Rouge, a police spokesman told the Associated Press.

Authorities were continuing to investigate the shootings that began about 8:40 a.m. less than a mile from police headquarters, in the area of Airline Highway and Old Hammond Highway.

“It’s an ongoing investigation with a lot of moving parts,” Edmonson said.

Kelly Zimmerman of Our Lady of the Lake said the hospital received five patients. Three were dead, one is in critical condition and the other is in fair condition, Zimmerman said.

Obama urged politicians to temper their rhetoric and focus on unity as the Republican and Democratic conventions loomed.

“We don’t need inflammatory rhetoric,” Obama said. “Someone once wrote: a bullet need happen only once, but for peace to work we have to be reminded of its existence again and again and again.”

“The violence, the hatred just has to stop,” Edwards said at his news conference flanked by law-enforcement officials.