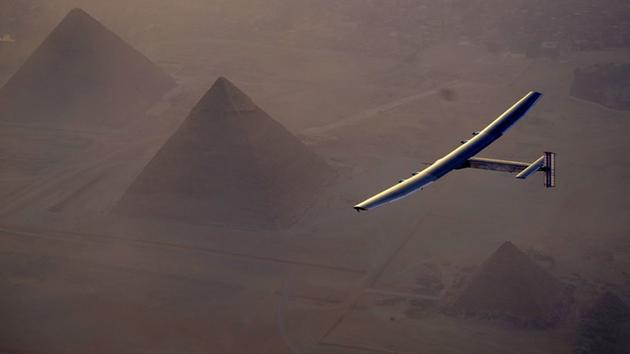 Solar Impulse 2, which landed in Abu Dhabi, is first plane powered by the renewable energy source to tour the globe.

Solar Impulse 2 has completed the first round-the-world flight by a solar-powered aeroplane, after touching down in Abu Dhabi early on Tuesday.

The final leg of the feat, aimed at showcasing the potential of renewable energy, was a bumpy one, with turbulence driven by hot desert air leaving the solo pilot, Bertrand Piccard, fighting with the controls.

The plane, which has a wingspan wider than a Boeing 747 and carries more than 17,000 solar cells on its wings, began the circumnavigation in March 2015 in Abu Dhabi. It has since crossed both the Pacific and Atlantic Oceans using no fossil fuel and has spent more than 23 days in the air.

Speaking to the Guardian from the cockpit shortly before landing, Piccard said he was feeling emotional as he neared the end of the journey: “It is a very, very special moment – it has been 15 years that I am working on this goal.”

“All the clean technologies we use, they can be used everywhere. So we have flown 40,000km, but now it is up to other people to take it further. It is up to every person in a house to take it further, every head of state, every mayor in a city, every entrepreneur or CEO of a company.”

“These technologies now can make the world much better and we have to use them, not only for the environment, but also because they are profitable and create jobs.”

During daylight, the solar panels charged the plane’s batteries, which make up a quarter of the craft’s 2.3 tonne weight. The pilot also climbed to 29,000 feet during the day and glided down to 5,000 feet at night, to conserve power. The plane flies at about 30mph, although it can go faster if the sun is bright.

The plane could fly almost perpetually but the pilots cannot, due to the gruelling conditions aboard.

Bertrand alternated with André Borschberg to fly the 16 legs of the journey, spending up to five days in the unheated and unpressurised cabin, taking only short naps and with the single seat doubling up as a toilet. Borschberg flew the longest leg, 4,000 miles over the Pacific from Japan to Hawaii, smashing the record for the longest uninterrupted journey in aviation history.

But Bertrand said his biggest challenge was getting his pilot’s licence in the first place: “The challenge was to come from the world of ballooning and hang gliding to the world of aeroplanes and instruments and procedures. When I initiated the project, I had no aeroplane licence so I had to work for it over six years. I did hundreds of hours to be allowed to fly a prototype aeroplane.”

Piccard and Borschberg, both Swiss, are seasoned adventurers. Piccard made the first non-stop balloon flight around the world in 1999, while Borschberg, a former Swiss Air Force fighter pilot, has had brushes with death involving an avalanche and a helicopter crash.

Bertrand said the final leg from Cairo to Abu Dhabi was particularly tough, because of having to fly at high altitude to avoid the worst of the turbulence. “It is a much more demanding and exhausting flight,” he said. “It is so turbulent, there were moments in the last night that I could not rest at all, I just had to fight with my flight controls.”

He said his ground team had made the record-breaking flight possible: “I am alone in the plane but all the people who have worked on this project are people who are completely devoted and committed to success. I will give to each of them a big hug, because they made my dream possible.”

The aim of the Solar Impulse adventure was not to develop solar-powered planes for widespread use, but to show the capabilities of renewable energy.

“I worked for 15 years to have [this] demonstration of the improvements of these technologies, so now I really want to leverage this demonstration and create a world council for clean technologies,” Piccard said. “That will allow all these experts and specialists to advise the governments and big corporations on which types of technology to use to profitably fight climate change and profitably protect the environment.”

Juliet Davenport, a solar-power pioneer and founder of the UK’s Good Energy firm, said: “It turns out the sky is not the limit. This feat proves the power of solar and I hope starts a revolution in people’s minds about how we use cleaner, greener technologies.”

Solar Impulse’s journey has not been without difficulties. Crosswinds in China caused weeks of delays in 2015 and overheating batteries during the Pacific crossing forced it to spend the winter inside a Hawaiian hangar. The team also overcame financial troubles in 2015 after raising €20m from sponsors.