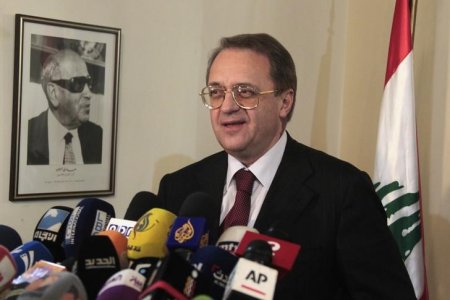 Russia has urged Saudi Arabia to provide a detailed explanation of its plans to participate in a potential ground intervention in Syria, saying any such move should be coordinated with relevant authorities.

Mikhail Bogdanov, a Russian deputy foreign minister, said Thursday Moscow had no “specifics” at the time about the plan for a possible ground incursion into Syria, the TASS news agency reported.

Bogdanov said any military action in Syria must be coordinated with the Syrian government or the United Nations Security Council.

“We believe that, just like Iraq, Syria is a sovereign state. It has a central authoritative power, and [military actions] should be coordinated with it,” the Russian official said.

Riyadh announced its readiness to send ground forces to Syria earlier this month. Foreign Minister Adel al-Jubeir said on Thursday that Saudi forces would only focus on targeting Daesh terrorists if they were deployed to Syria.

“If they enter Syria, these forces will work in the framework of the international coalition to fight Daesh, there will be no unilateral operations,” added Jubeir.

Riyadh is currently a member of the Washington-led alliance carrying out airstrikes against what is said to be DAESH targets in Syria since 2014.

The kingdom has long been supporting certain militant groups operating to topple the government of Syrian President Bashar al-Assad since 2011.

Bogdanov also referred to a proposal by German Chancellor Angela Merkel for the establishment of a no-fly zone over northern Syria, saying it is not practical.

“What no-fly zone can we talk about when aircraft of the anti-DAESH coalition led by the United States fly there, when the Aerospace Forces of the Russian Federation continue their operation coordinated with the official Syrian authorities,” he said.

In a Thursday statement, the Russian Foreign Ministry said the no-fly zone would amount to “interference in Syria’s domestic affairs, violation of its sovereignty, the principle of inviolability of borders.”

Such a measure “totally contradicts international law and the UN Charter,” it said, adding the move would only protect terrorist groups and would not contribute to international efforts to end the Syria conflict.

It was Turkey which first called this week for a safe zone to shelter displaced people inside Syria as the Syrian army made significant advances against militants on several fronts, particularly in Aleppo.

Former US officials Nicholas Burns and James Jeffrey wrote in the Washington Post that a protected zone south of the Turkish border would have “manifold benefits,” including restricting Syrian operations.

According to Syria expert Tim Eaton of London’s Chatham House, the “strong suspicion” is that Turkey would use the territory as a base for striking at Syrian Kurdish forces it identifies as “terrorists,” and drawing in the US which supports the Kurds.