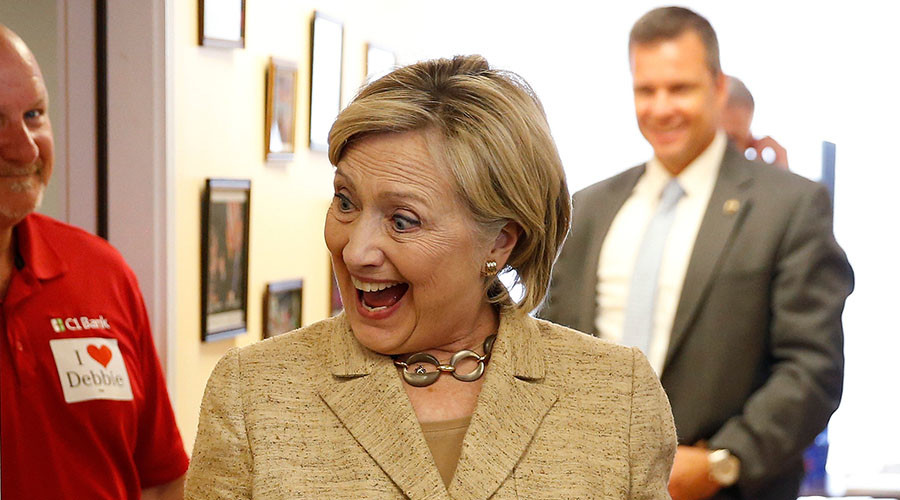 Democratic presidential candidate Hillary Clinton, who often lectured African countries about corruption as Secretary of State, now faces her own scandal for questionable ethics and the trending hashtag #PayToPlay.

A number of emails that the former first lady failed to turn over to the US government, but were released after a Freedom of Information Act request, show donors and associates of the Clinton Foundation and its Global Initiative seemingly having special access inside the State Department.

In 2009, the same year Hillary Clinton told Kenyans: “The government has to reform itself if Kenya will be all that it can be,” Clinton Foundation official Doug Band emailed her top aides at the time, Cheryl Mills and Huma Abedin, stating that it’s “important to take care of [Redacted].”

Abedin replied to Band within 10 minutes, telling him that they “have all had him on our radar” and that “personnel has been sending him options.”

It is not known whose name has been redacted.

Band, who helped negotiate Hillary Clinton’s secretary of state job with the Obama administration, emailed Abedin and Mills a few days later, stating that “we need Gilbert Chagoury to speak to the substance person re Lebanon. As you know, he’s a key guy there and to us and is loved in Lebanon. Very imp.”

Abedin responded a few hours later that the “substance person” is Jeffrey Feltman, who was the US ambassador to Lebanon at the time.

“I’m sure he knows him. I’ll talk to Jeff,” added Abedin.

The Gilbert Chagoury referred to in the emails is a billionaire businessman in Nigeria who has been at the center of a number of investigations and was convicted by Swiss authorities in 2000 for money laundering.

He is also a ‘FOB’ (“friend of Bill” Clinton) and contributed to various campaigns for both members of the power couple as well as up to $5 million to their foundation and a $1 billion pledge for their global initiative, according to ABC News.

Chagoury had trouble leaving the US in 2010 when he was found on the government’s “no-fly list,” although he was reportedly able to fly to France on a private jet after obtaining a waiver from Washington.

In 2015, Republican Senator David Vitter wrote a letter to Secretary of State John Kerry, stating that questions remained over whether Clinton’s relationship with Chagoury influenced the State Department’s decision against designating Boko Haram as a Foreign Terrorist Organization while she was in office.

While Clinton’s campaign has said that “neither of these emails involve the secretary or relate to the Foundation’s work,” they have been described as further proof of the corruption Clinton has been involved in, particularly while in office.

The emails cover mainly the first three months of Clinton holding the office of Secretary of State – and precede those comments she made during a trip to a number of African countries in which she condemned government corruption.

“True economic progress in Africa… also depends on responsible governments that reject corruption, enforce the rule of law, and deliver results for their people,” Hillary Clinton said during a trade meeting with sub-Saharan countries according to Reuters, a repeat of the message delivered the previous month by Obama in Ghana. “This is not just about good governance, this is about good business.”

Another email, dating from February 2009, also reveals Hillary Clinton requesting a meeting with Stephen Roach, then chairman of the Asian branch of Morgan Stanley and one of her big donors who had emailed her several days earlier.

Clinton tells Abedin to see if Roach can “come to embassy or other event” while she is in Beijing during an upcoming trip to Asia.

Judicial Watch noted that such communications are in breach of the ethics agreements that Clinton agreed to in order to be appointed secretary of state.

“I will not participate personally and substantially in any particular matter involving specific parties in which The William J. Clinton Foundation (or the Clinton Global Initiative) is a party or represents a party,” Hillary Clinton wrote in a letter to State Department Designated Agency Ethics Official James Thessin in January 2009.

“No wonder Hillary Clinton and Huma Abedin hid emails from the American people, the courts and Congress,” Judicial Watch President Tom Fitton said in a statement. “They show the Clinton Foundation, Clinton donors, and operatives worked with Hillary Clinton in potential violation of the law.”

Following the release of the emails, social media users have started using the hashtag “PayToPlay,” describing the content of the emails as further evidence of the corruption Clinton was involved in.