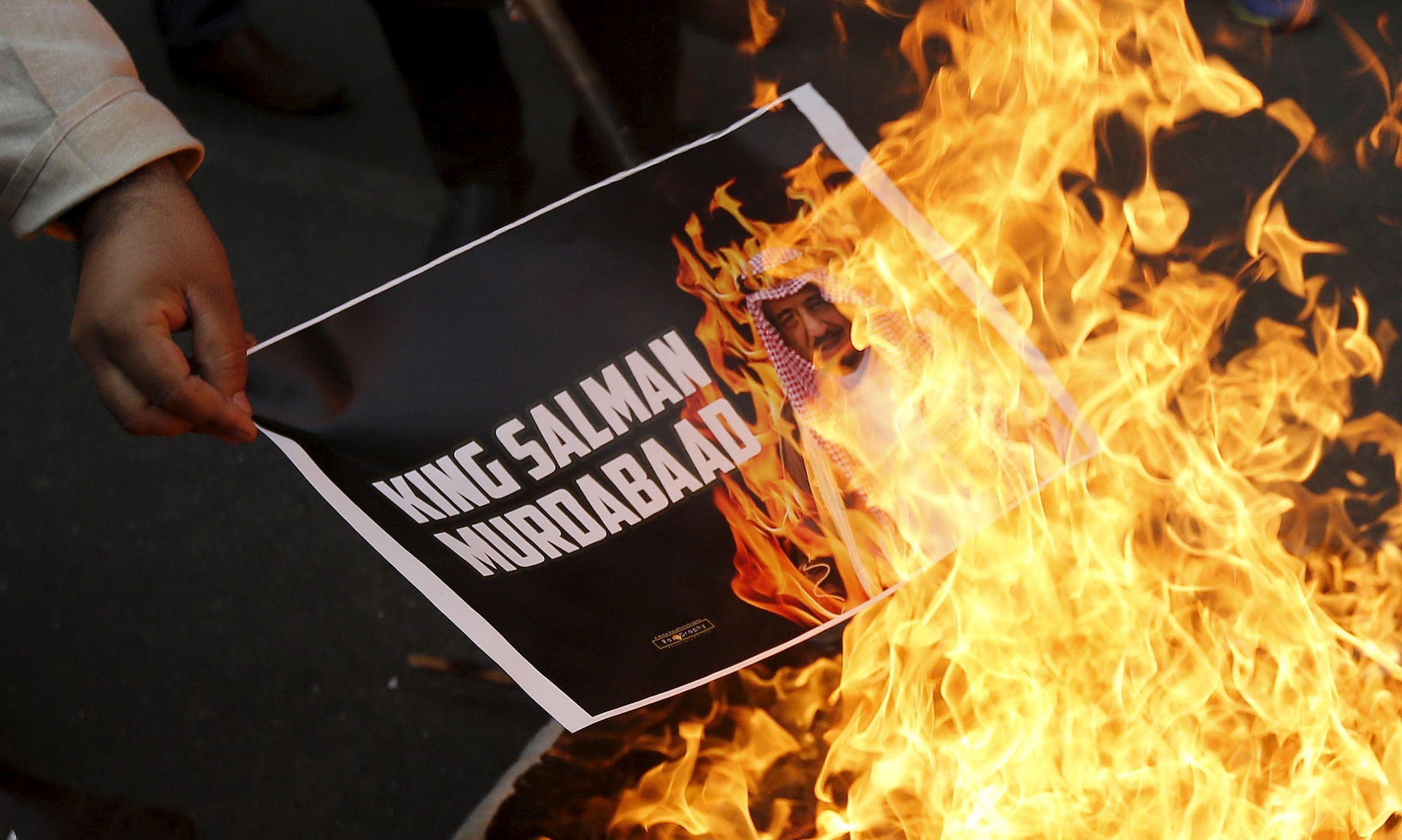 A man burns a picture of Saudi Arabia’s King Salman at a protest in Delhi over the execution of the Shia cleric Nimr al-Nimr. One of the charges against Nimr was ‘breaking allegiance with the ruler’. Photograph: Adnan Abidi/Reuters
Share
Tweet
Share
Share
Email
Comments

Saudi Arabia’s decision to execute the Shia cleric Sheikh Nimr al-Nimr on 2 January may have been accompanied by a wish to bury bad news. It doesn’t take a PR genius to work out that the western world shuts down for the new year holiday.

But if the Saudis were hoping the timing would mean no one would notice they were badly mistaken. The execution has worsened the kingdom’s already hostile relationship with Iran, turning the Nimr case into one that dangerously combines both state and sectarian rivalry – writ large across the Middle East in proxy wars in Syria and Yemen and tensions in Lebanon and Iraq.

The Saudi system is opaque in the extreme. Still, Riyadh had made it clear since at least November that it intended to mete out the death penalty to the high-profile figure who championed the country’s downtrodden Shia minority – as well as to 43 Sunni Muslims convicted of terrorist attacks.

Nimr had been in detention since 2012 so there was no rush to judgment, however flawed the judicial process. He was convicted of sedition, disobedience and bearing arms. Nimr did not deny the political charges against him but insisted he neither carried weapons or called for violence.

Saudi sources say that King Salman, who came to the throne a year ago, signed the royal decrees allowing the executions to go ahead because of mounting public pressure to get tough. Abdullah, his more moderate predecessor, had not been prepared to do that.

That is an uncheckable claim, though Saudi Arabia’s hyperactive social media scene is full of demands to resist Shia and Iranian influence – often couched in crudely sectarian terms. And they have been given greater weight by Isis presenting itself as the only force able to fight Shia expansionism.

The executions also fit into an impression of a tougher line – at home and abroad – being pushed by Mohammed bin Salman, the king’s son, deputy crown prince and defence minister. Plummeting oil prices – bringing a 40% hike in petrol prices – and anxiety about an unwinnable war in Yemen are adding to pressure to look assertive.

The message, as interpreted by John Jenkins, former UK ambassador to Riyadh, is: “We, the Saudis, are not going to be pushed around by anybody. We reject Iranian interference … and we will stand up against anyone who we think is an Iranian agent of influence inside our country and who calls for the dissolution of the kingdom.”

Saudi Arabia suffers from an appalling international image, not least because of its use of sharia-mandated punishments and because its version of fundamentalist Salafi (Wahhabism) Islam is often described as being an inspiration for – and indistinguishable from – DAESH, even though it is targeted by the jihadi group and fears its self-proclaimed caliphate.

But in the death penalty stakes it is outstripped by Iran, which executed more than three times as many people in 2014 and uses similar arguments to those justifying Nimr’s execution. The bad relations between Riyadh and Tehran are between an autocracy in which the monarchy claims religious legitimacy and an Islamic Republic ruled by a theocratic “supreme leader” that replaced a monarchy, though Iran also has parliamentary and other elections that are unthinkable in Saudi Arabia.