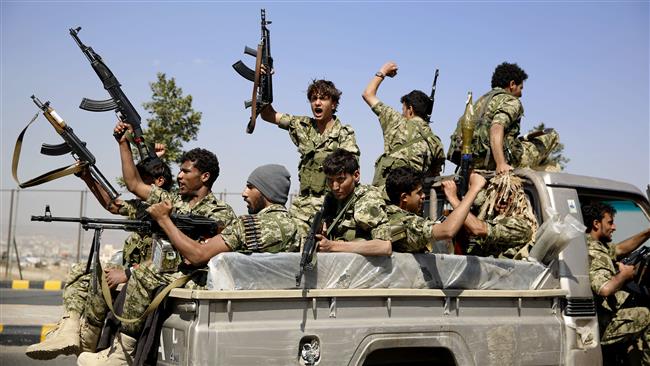 In this December 14, 2015 photo, Yemeni Ansarullah fighters ride on a patrol truck as they chant slogans during a tribal gathering showing support for the Houthi movement in Sana’a. ©AP
Share
Tweet
Share
Share
Email
Comments

Yemen’s army and popular committees have killed five Saudi soldiers on the kingdom’s soil amid Riyadh’s relentless bombardment of its impoverished neighbor.

One of the Saudi troops was killed during clashes with Yemeni forces in al-Rabou’a area of Saudi Arabia’s southwestern Asir region on Wednesday, said al-Masirah television channel.

According to the Yemeni channel, Saudi armed forces said Sergeant Jobran Hassan Meqlez Siram succumbed to the injuries he had sustained during the clashes in hospital.

The report also quoted Saudi sources as saying that the soldier was wounded as his tank was targeted.

Another report by al-Alam news channel said four other Saudi troops died when a rocket fired by Yemenis hit their position in the Jizan region in Saud Arabia’s southwest.

Meanwhile, a Saudi surveillance aircraft was shot down in Kashr district in the Yemeni province of Hajjah by the Yemeni army and allied Ansarullah fighters.

Several terrorists and Saudi mercenaries were reportedly killed in the operations.

Elsewhere, a number of militant concentration camps in Yemen’s Ma’rib Province were also targeted by the Yemeni troops.

Yemenis also thwarted attempts by al-Qaeda terrorists and pro-Hadi militants to infiltrate into military positions in Majzar district, killing an unspecified number of them.

The developments come as the Riyadh military presses ahead with its bombing campaign against Yemen.

Saudi Arabia has started military strikes against Yemen since March 2015, without a UN mandate, in a supposed bid to undermine the Houthi Ansarullah movement and restore power to fugitive former Yemeni President Abd Rabbuh Mansur Hadi, an ally of Riyadh.

More than 7,500 people have been killed and over 14,000 others injured since the strikes began. The strikes have also taken a heavy toll on the country’s facilities and infrastructure, destroying many hospitals, schools and factories.

The Saudi military has also blocked the flow of relief aid into Yemen, creating an unprecedented humanitarian crisis in the impoverished Arabian Peninsula state.