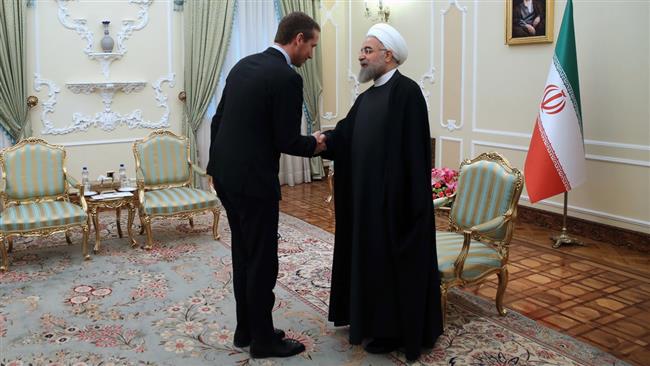 Iranian President Hassan Rouhani says Saudi Arabia will not be able to distract from its “great crime” of killing a religious leader by severing its ties with the Islamic Republic.

Referring to the Saturday execution by Saudi Arabia of prominent Shia cleric Sheikh Nimr al-Nimr, President Rouhani said on Tuesday, “It is only natural that a crime against Islamic and human rights will be met with reaction from public opinion.”

“Of course, the Saudi government, in order to cover up its crime of beheading a religious leader has resorted to a strange measure and has severed its ties with the Islamic Republic, whereas, undoubtedly, such moves will never hide that great crime,” said the Iranian president, who was speaking during a meeting with Danish Foreign Minister Kristian Jensen in Tehran.

Saudi Arabia faced strong condemnation from Iran, as well as other countries, soon after the execution of Sheikh Nimr, who was a vocal critic of the Riyadh regime.

“Criticism should not be responded to with beheading,” President Rouhani said, adding, “We hope that European countries, which always react to issues of human rights, would act on their human rights-related obligations in this case, too.”

Amid the largely peaceful protests, a group of people scaled the walls of the consulate in Mashhad while incendiary devices were hurled at the embassy in Tehran. Some 50 people were detained over the violation of the diplomatic perimeters.

Recounting Copenhagen’s reaction to Saudi Arabia’s execution, Jensen told President Rouhani that Denmark was the first country to condemn the killing of Nimr.