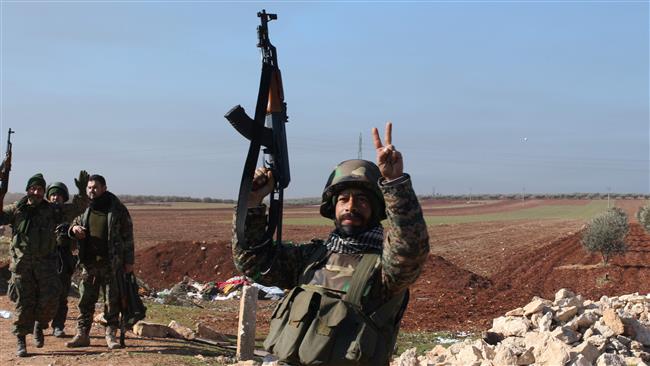 Syrian army soldiers backed by fighters from allied popular defense groups have managed to retake control of a strategic town in the country’s southern province of Dara’a.

Moreover, Syrian troopers struck terrorists’ positions in the al-Mahatta neighborhood of Dara’a, leaving an unspecified number of militants dead. Several vehicles belonging to the terrorists were also destroyed in the process.

A large number of terrorists were killed or injured during an army operation in the al-Manshiyeh neighborhood of Dara’a.

Also on Thursday, Syrian government forces received hero’s welcomes as they marched into the towns of Nubl and Zahra near the northwestern city of Aleppo, situated some 355 kilometers (220 miles) north of Damascus.

The celebrations came a day after Syrian army soldiers, supported by fighters from pro-government popular defense groups as well as the Lebanese Hezbollah movement, broke the three-and-a-half-year siege of the towns.

Syrian forces also closed in on members of Jaish al-Fatah (Army of Conquest) militant group in the city of Hama, 213 kilometers (132 miles) north of the capital, killing at least 40 Takfiri terrorists.

The foreign-sponsored conflict in Syria, which flared in March 2011, has claimed the lives of more than 260,000 people and left over one million injured, according to the United Nations.

The world body says 12.2 million people, including more than 5.6 million children, remain in need of humanitarian assistance in Syria. The foreign-sponsored militancy in the Arab country has also displaced about half of the country’s population.