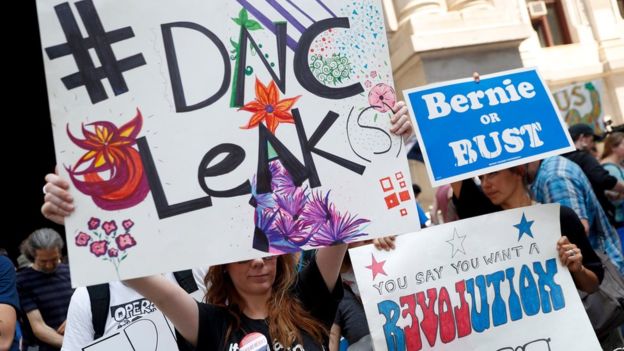 WikiLeaks released files on Wednesday of what it said were audio recordings pulled from the emails of the Democratic National Committee that were obtained by hacking its servers.

The latest release, which came in the middle of the Democratic National Convention where Hillary Clinton was officially named the party’s presidential nominee, is the second batch in a series that has deeply rattled the party and prompted the organization’s chairwoman, Debbie Wasserman Schultz, to step down.

The hacked audio files is correspondence between the various committee leaders of the Democratic Party.

Democrats have already been shocked after the publication of the stolen documents and emails that shows that the party leadership tried to undermine Bernie Sanders’ campaign.

The Kremlin has dismissed the US allegations of interfering in the country’s presidential election campaign after Washington blamed Russian hackers for a leak of US Democratic National Committee (DNC) emails.

Obama also claimed that Federal Bureau of Investigation experts have attributed the leak of the DNC emails to the Russians, saying, “What we do know is that the Russians hack our systems, not just government systems but private systems.”

Speaking at a press conference in Moscow on Wednesday, Kremlin spokesman, Dmitry Peskov, said Russian President Vladimir Putin has repeatedly emphasized that Moscow “has never interfered and does not interfere in the internal affairs … of other countries.”