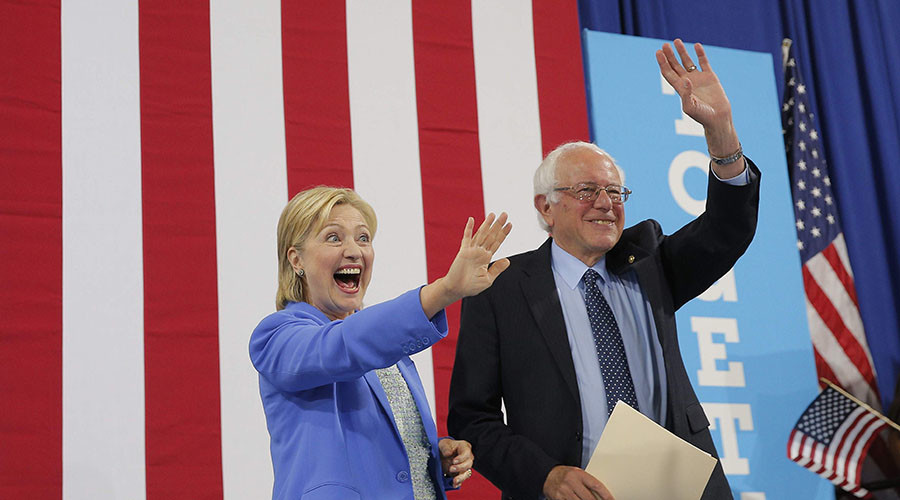 “Secretary Clinton has won the Democratic nominating process and I congratulate her for that. She will be the democratic nominee for the president and I intend to do everything i can to make certain she will be the next president of the United States,” he said joining Clinton in Portsmouth, New Hampshire, where he trounced her in the first primary of the season. Its location is reminiscent of 2008, when then-Senator Clinton (D-New York) conceded the Democratic nomination to Senator Barack Obama (D-Illinois) at a rally in Unity, New Hampshire.

The pair entered the rally as Bruce Springsteen’s ‘We Take Care of Our Own’ blared. Clinton and Sanders each wore blue.

Sanders began his remarks by thanking the people who voted for him, especially in New Hampshire, where he received his first victory, and in Vermont, his home state. He also thanked those who volunteered for his campaign and the 2.5 million people who donated “small, individual contributions.”

“Together, we have begun a political revolution to transform America and that revolution continues. Together, we continue the fight to create a government which represents all of us, and not just the one percent – a government based on the principles of economic, social, racial and environmental justice,” Sanders said, saying how proud he was of the campaign he had run. He then noted that, although he had won almost 1,900 delegates in the primaries and caucuses in 22 states, Clinton “goes into the convention with 389 more pledged delegates than we have and a lot more superdelegates.”

“I have come here today not to talk about the past but to focus on the future. That future will be shaped more by what happens on November 8 in voting booths across our nation than by any other event in the world,” he continued. “I have come here to make it as clear as possible as to why I am endorsing Hillary Clinton and why she must become our next president.”

“This campaign is not really about Hillary Clinton, or Donald Trump or Bernie Sanders, or any other candidate who sought the presidency. This campaign is about the needs of the American people and addressing the very serious crises that we face. And there is no doubt in my mind that, as we head into November, Hillary Clinton is far and away the best candidate to do that,” he said.

Sanders’ speech was met with both cheers and boos from the crowd.

In his speech, Sanders focused on “the needs of the American people and addressing the very serious crises that we face,” including raising the minimum wage, nominating Supreme Court justices, improving access to health care and mental health treatment, reducing income inequality, making college more affordable and accessible, and ending bigotry. For each issue, he compared Clinton to presumptive Republican nominee Donald Trump, saying that Clinton was the obvious choice to continue the policies he and his supporters prefer.

“It is no secret that Hillary Clinton and I disagree on a number of issues. That’s what this campaign has been about. That’s what democracy is about,” Sanders said, before noting that the Democratic platform, which saw “a significant coming together between the two campaigns,” will be “by far, the most progressive platform in the history of the Democratic Party.”

Bernie Sanders, who has lost most of his leverage, has totally sold out to Crooked Hillary Clinton. He will endorse her today – fans angry!

Clinton discussed her history with Sanders over the last quarter-century: “His reputation for passionate advocacy hasn’t always made him the most popular person in Washington, but, you know what? That’s generally a sign you’re doing something right!” she said.

She noted how he had “brought people off the sidelines and into the political process… energized and inspired a generation of young people who care deeply about our country and are building a movement that is bigger than one candidate or one campaign.”

“Thank you, thank you, Bernie, for your endorsement, but more than that,” she said as the audience broke into applause, “thank you for your lifetime of fighting injustice. I am proud to be fighting alongside you because, my friends, this is a time for all of us to stand together. These have been difficult days for America.”

Like Sanders, Clinton delved into the central planks of the Democratic Party platform, but she also proposed two new steps to help law enforcement get the support they need but also “stopping the tragedy” of African-Americans “being killed in police incidents.” She called for national guidelines on the use of force by officers and provide better training on implicit bias.

Clinton then discussed how the Dallas Police Department is a model of how law enforcement and communities can build trust between them, praising them for their reaction to an ambush on Thursday that killed five officers and injured nine others.

She then pivoted to gun control, mourning the loss of Seth Rich, a 27-year-old Democratic National Committee staff member who was fatally shot in his Washington, DC neighborhood on Sunday. “Surely we can agree that weapons of war have no place on the streets of America,” she said.

From there, Clinton moved to economic issues, including wealth inequality and the minimum wage. She promised the biggest investment in jobs since World War II. However, while she said that the current federal minimum wage of $7.25 an hour is “a starvation wage,” she did not go as far as Sanders’ proposed $15 minimum wage. Going against the Democratic platform, she sided with her former rival in blasting unfair trade agreements, including the Trans-Pacific Partnership (TPP).

Effects of waiting to endorse

Sanders had been under intense pressure to bow out of the Democratic race for president, but he bided his time and forced both the party platform and Clinton herself to move to the left on issues important to the Vermont senator.

The Democratic platform, unveiled July 1, shows substantial influence from Sanders. “Millionaires and billionaires” are targeted in a call to implement a “multimillionaire surtax” and the phrase “starvation wage” appears in the party’s condemnation of the current minimum wage, saying it “must be increased to a living wage.”

The platform does not, however, oppose the Trans-Pacific Partnership, which Sanders lamented on Twitter. Additionally, there is no mention of hydraulic fracturing, or fracking, another issue close to Sanders’ campaign and supporters.

Last Wednesday, Clinton also moved left, adopting a major plank of Sanders’ campaign by proposing a plan to eliminate college tuition at public universities for families earning under $125,000 a year. Free college was a central issue for Sanders.

Sanders praised Clinton for moving closer to his platform, saying that such a plan would have a “profound” impact on the US.

Clinton has also announced a proposal to expand access to health care, another issue important to Sanders.

The two campaigns had been working together over the past month to bring the candidates closer together on issues and make the endorsement happen.

“The most progressive platform in Democratic Party history adopted over the weekend by the Platform Committee is one result,” Michael Briggs, Sanders’ spokesman, told USA Today. “The millions of supporters of Senator Sanders deserve credit and should be proud that their energy and enthusiasm has yielded these solid results.”