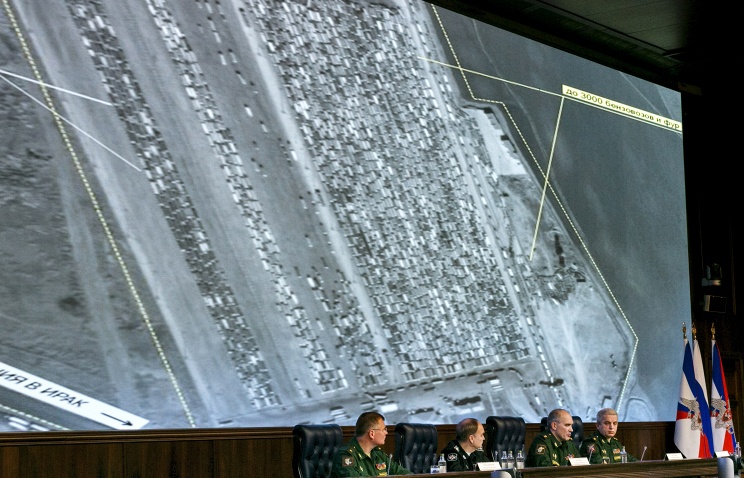 “Three key routes of oil transportation to the territory of Turkey from Daesh gangs-controlled regions of Syria and Iraq have been exposed,” Rudskoy said.

The western route, the general said, reaches Turkish ports on the Mediterranean coast, the northern route – the Batman oil refinery in Turkey, the eastern one – a large transshipment base in the town of Cizre.

The Defense Ministry’s information was supported by numerous photo and video materials demonstrating that oil tanks were moving from Syria to Turkey.

Western route
“Along the Western route, hydrocarbons produced at the oil fields near the city of Rakka, are transported by motor transport, mainly at night, to Syria’s northwest. Then they go via the border inhabited localities Azaz (Syria) and Reyhanli (Turkey) to the Turkish ports of Dortyol and Iskenderun,” Rudskoy said, showing a satellite photograph made near Azaz on November 13.

“Part of oil is reloaded to ships and sent to be processed beyond Turkey, and part is sold on the domestic market. One oil tanker is loaded on the average in these ports daily,” the General Staff official said. He showed space photographs of the ports of Dortyol and Iskenderun, dated November 25, where many gasoline tankers awaiting shipment can be seen.

Northern route
The Northern route, Rudskoy said, leads to Turkey from the area of oilfields on the right bank of the Euphrates. The area of the locality of Deir-ez-Zor is one of the large oil production and processing centers controlled by Daesh terrorist organization.

“There is a great amount of oil refineries here, one of which you see on the screen,” Rudskoy said showing relevant shots. “Many gasoline tankers awaiting shipment have constantly been registered in this area. You are shown photographs of motorcades at a small distance from each other.”

Eastern route
The third route of oil transportation to Turkey leads from oil deposits in Syria’s northeast and Iraq’s northwest, via the border inhabited localities of Kara-Chokh and Cham-Khanik in Syria and Tavan and Zakho in Iraq.

“The photographs show many gasoline tankers and trucks near these inhabited localities. On November 28, a total of 50 gasoline tankers were exposed near Kara-Chokh at an oil pumping station,” Rudskoy showed at a photo.

He said photographing conducted November 14 near Tavan and Zakho made it possible to discover over 1,100 gasoline tankers and trucks.

All shots shown at the briefing have been posted on the official website of the Russian Defense Ministry.