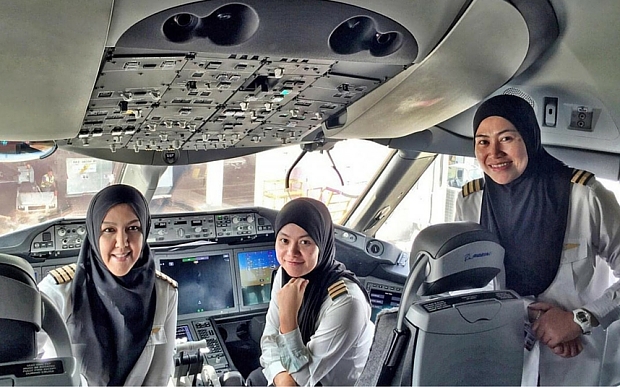 The pilots are fine to land the plane in Saudi Arabia, but they have to make sure a man picks them up from the airport.

An all-female pilot crew has touched down in Saudi Arabia, highlighting the absurdity of laws preventing women from driving cars.

Once grounded, the Royal Brunei pilots would have risked arrest if they attempted to drive a motor vehicle on the kingdom’s roads.

Having an all-female pilot crew was a massive milestone for Royal Brunei Airlines, but it threw into relief the absurdity of women not being allowed to drive, when they touched down in Saudi Arabia.

In 2012, she told The Brunei Times: “Being a pilot, people normally see it as being a male dominant occupation.

“As a woman, a Bruneian woman, it is such a great achievement. It’s really showing the younger generation or the girls especially that whatever they dream of, they can achieve it”.

Last year, women were allowed to stand in elections for the first time in Saudi, and they were able to vote.
Pictures of women in voting stations erupted across social media as they celebrated having this right.

But still women have to be driven by a man if they want to travel anywhere by car.

The kingdom is the only country in the world that forbids women from driving, with Muslim clerics claiming “licentiousness” will spread if women drive.

While there is no specific law to prevent women from driving in Saudi Arabia, women cannot apply for driver licences and they are arrested if found behind the wheel.

The 150-member Shura Council is appointed by the king, drawing on various sectors of society to act as the closest thing to a parliament in the kingdom, though it has no legislative powers. King Abdullah appointed women to it for the first time, and now there are 30 female members.

The driving ban has long forced families to hire live-in drivers for women. Women who can’t afford the £200 to £300 a month for a driver must rely on male relatives to drive them to work, school, shopping or the doctor.