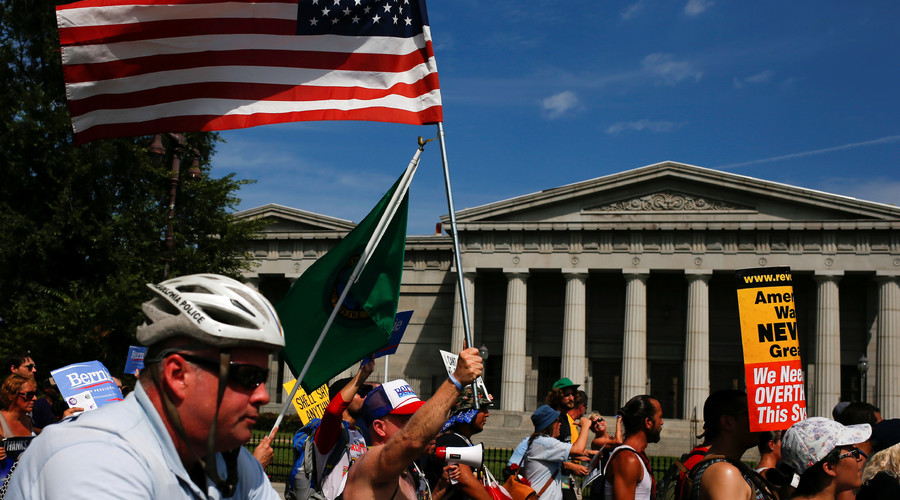 A policeman on a bicycle passes supporters of U.S. Senator Bernie Sanders as they take part in a protest march ahead of the 2016 Democratic National Convention in Philadelphia, Pennsylvania on July 24, 2016. © Adrees Latif / Reuters
Share
Tweet
Share
Share
Email
Comments

Hillary Clinton took the convention stage to become the first woman ever to accept a major U.S. party’s presidential nomination.

“It is with humility, determination and boundless confidence in America’s promise that I accept your nomination for President of the United States,” Clinton said to thunderous applause at the Wells Fargo Center in Philadelphia.

Clinton appeared almost overcome with emotion as she entered the arena to loud cheers and embraced her daughter, Chelsea, who introduced her as the next President of the United States. She took a deep breath to collect herself as delegates in the crowd were in tears.

“To all of you whose hard work brought us here tonight and to those of you who joined our campaign this week,” Hillary Clinton said, “what a remarkable week it’s been.”

Clinton quickly reached out to disappointed Bernie Sanders voters, saying “I want you to know, I’ve heard you. Your cause is our cause.”

And she took an early swipe at Republican nominee Donald Trump.

“Don’t let anyone tell you we don’t have what it takes,” Clinton said. “Most of all, don’t believe anyone who says: ‘I alone can fix it,‘” a reference to Trump’s acceptance speech last week.

She told Americans the nation is facing a “moment of reckoning” as powerful forces try to tear it apart.

“Powerful forces are threatening to pull us apart,” she said.

As she makes history by accepting her role as the first female nominee of a major political party, Clinton is offering herself as the epitome of steady leadership to a nation that is anxious and looking for reassurance.