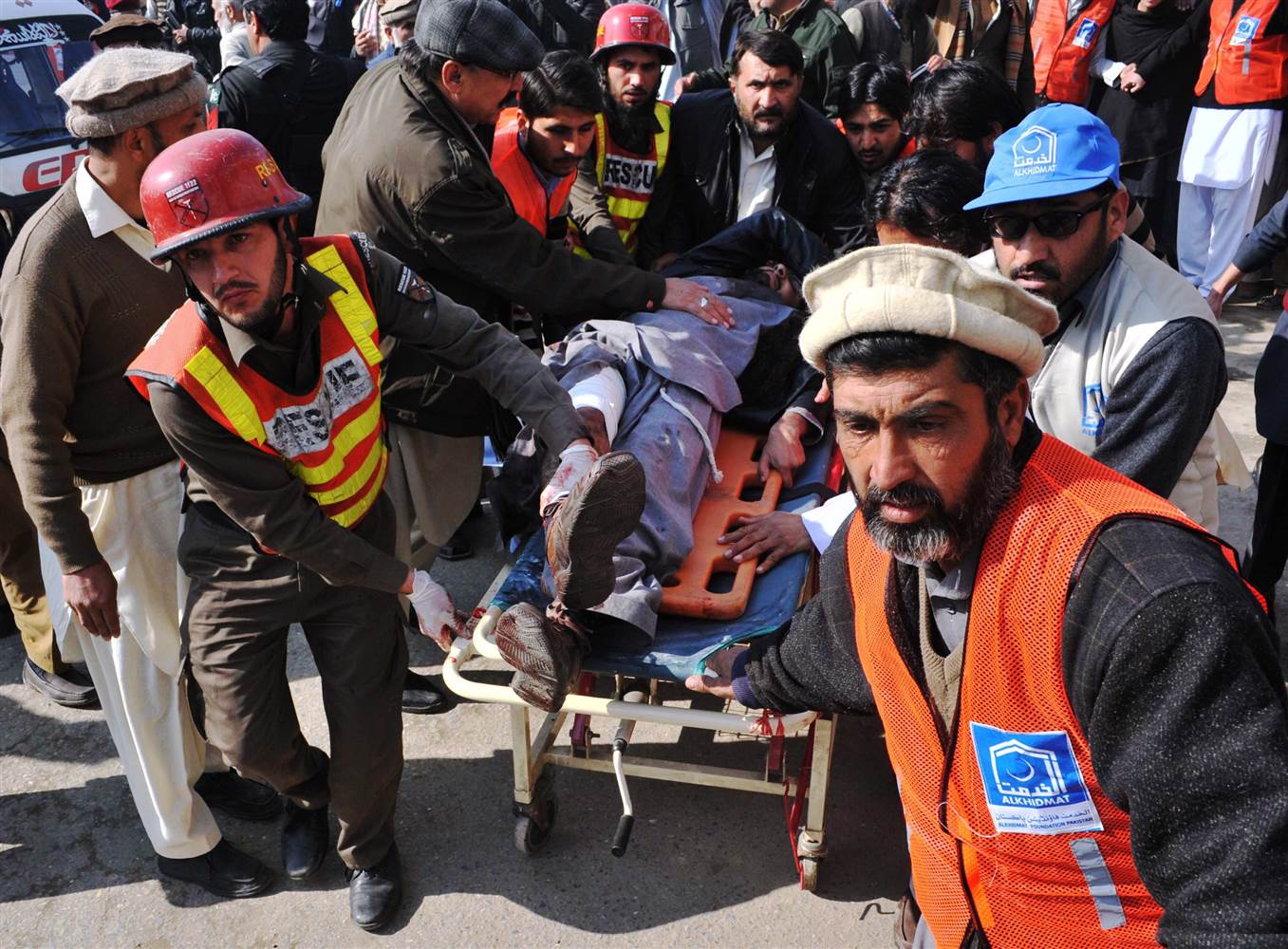 CHARSADDA, Pakistan — Gunmen stormed a university in northwest Pakistan Wednesday morning, killing some 20 people and injuring around 60, according to a local lawmaker.

“There was heavy fog in the area when armed men entered … and started firing at the security guards, students and teachers” at Bacha Khan University in Charsadda, regional police chief Saeed Wazir said.

Shaukat Yousafzai, a lawmaker of the ruling Pakistan Tehreek-i-Insaf (PTI), told NBC News that 20 people had been killed by the attackers, who scaled the walls around the campus. Some students and faculty were also taken hostage, he said.

Four of the gunman were killed during an exchange of gunfire with security forces, according to military spokesman Lt. Gen. Asim Salim Bajwa. At least two of the attackers were wearing suicide vests they were not able to detonate, he added.

“They shot [and] injured three security guards and one of them later went to block number one, another climbed to upper floor of the building and the third one went towards administration block,” he said.

Survivor Aizaz Khan thought he was hearing a fight when shooting started.

“We heard firing from the back of the campus,” the student told reporters. “Then the firing increased. Then we said, ‘Get into the rooms — don’t go out.’ Then the security forces came. They showed great bravery.”

Police chief Wazir said some of the students had been rescued from their dorms.

Bacha Khan University is named after Khan Abdul Ghaffar Khan, a prominent progressive politician and champion of women’s rights. Wednesday is the anniversary of his 1988 death.

Vice Chancellor Fazle Rahim Marwat said 3,000 students are enrolled at the university. There were move people than usual on campus on Wednesday because the school was holding a poetry symposium to honor Khan, professors told NBC News.

Authorities had been warned about the possibility of an attack about two weeks ago and had increased security at the site, an official said speaking on condition of anonymity told NBC News.

Pakistan’s Prime Minister Nawaz Sharif was “personally monitoring the situation” in Charsadda, according to a statement issued by his office.

“We are determined and resolved in our commitment to wipe out the menace of terrorism from our homeland,” he said in a statement. Sharif was attending the World Economic Forum (WEF), the annual gathering of world business and political leaders held in Davos, Switzerland.

While a Taliban commander initially claimed responsibility for the attack, a spokesman for the group later denied the militants had been involved.

“This is a reaction to extrajudicial killing of our people by the Pakistani security agencies,” Khalifa Omar Mansour, the head of the Pakistani Taliban’s (TTP) military wing, told NBC News over the telephone as he took responsibility for directing the siege.

According to the Taliban, Mansour directed the December 2014 siege of the Army Public School in Peshawar that left 143 students and several soldiers dead. Peshawar is some 20 miles south of Bacha Khan University.

However, Muhammad Khurasani, a spokesman for the TTP, said on Twitter that the group “strongly” condemned the move.