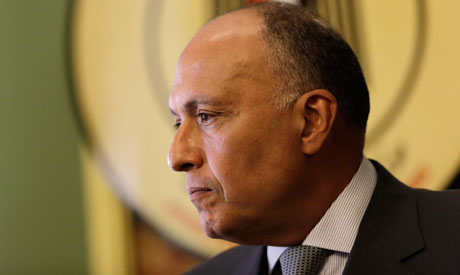 Egypt’s foreign affairs minister called on Thursday for “the immediate and unconditioned withdrawal of Turkish forces from Iraq,” describing it as a violation of the country’s sovereignty.

Foreign Minister Sameh Shoukry, during an urgent Arab League meeting in Cairo, added that “violations to the sovereignty of Arab states have been ongoing on a daily-basis” and that “terrorism has been used as an excuse for regional and international interventions in Arab states’ affairs.”

Last week, Turkey deployed soldiers and tanks to a military camp near the Iraqi city of Mosul. Baghdad labeled the deployment as an illegal “incursion” but Turkey said it was to protect Turkish trainers working with Iraqi forces battling the DAESH militant group.

Shoukry also said that Egypt denounces all other types of intervention in Arab countries’ domestic affairs.

Egypt, according to Shoukry, supports Iraq’s efforts to remain sovereign and establish its national unity and stability.

Shoukry also mentioned that Egypt would begin its two-year term as a non-permanent Security Council member next week, adding that the country will work on supporting the causes of Arab states.

During the Arab League meeting, other Arab states’ representatives adopted Egypt’s stance, calling for the withdrawal of Turkish forces.